As Spring approaches, a change occurs in Austin, Texas. The city’s nearly 800,000 population is swamped by artists, musicians, films makers, promoters and A &R men for the South by Southwest, or SXSW, festivals.

One promoter who makes a particularly long trip is Shakey, travelling the 5000 miles to Austin on the lookout for new talent.

"This is my third visit to SXSW, it’s a great place to check up and coming bands from around the world and see them up close, chat to them and try to get them to come and play one of my nights and get played on my radio show."

The visit is a two way venture, however. Whilst Shakey is keen to find bands to bring over, he also spends plenty of time promoting, taking across his compilation album, made up of entirely local bands.

"I originally did the compilation CD back in 2007 as I was getting more friends in bands giving me their three track cds to take to LA, New York etc” he says. “It was getting too much so the idea was to put a CD together with all my mates’ bands on it, and this grew to a 17 track album."

Part one of his trip this year will be going to New York, before going on to Austin to attend various showcases of new music, handing out the album as he goes.

"The response from previous albums has been really positive” Shakey tells me. “The first one was previewed on Future Sounds in LA, and was the CD that got me my first gig at Seabrights. Since then it has been given out, reviewed and played all around the world."

So with such a wealth of local talent to choose from, how does he choose the tracklisting?

"I choose the acts to go on firstly by asking my mates in bands. They have supported me from day one, so always get the first option. Then I give away some spaces as prizes, including the finalists and winners of Undiscovered which I help run, and the Y Fest winners, as well as bands that play for me on a regular basis. This year it is so nice to still have the likes of Seven Summers and Redtrack submitting tracks despite the fact they are doing so well – it gives the whole album a bigger profile."

This year sees Shakey producing a double album (in homage to Guns n Roses’ two part Use Your Illusion) under the title of Rock n Roll. The first CD, Rock, has a harder, edgier sound, whilst the second CD, Roll, features more laid back and acoustic tracks.

All in all it is a huge amount of effort to go to for a local promoter, and Shakey is quick to thank those that have helped him along the way.

"I can’t talk about the CDs without giving huge thanks to Rob,” he says, “who has designed all the covers from day one, and Sean who has proof read and corrected every cover from the start.

"Then of course huge thanks to every band and act that has ever submitted a track for the CD - each album has and always will be self-funded. No bands get charged to appear on the CDs and they all get an individually numbered copy when they are finished.

"Together, we can make the local scene rock."


I was recently handed a CD at a club by a guy from Essex/Chelmsford, England, and I was brought back to the days of buying cool mix tapes from around the world and discovering scenes in places you've never been. Shakey, from SHAKSTER RECORDS gave me this solid collection of unknown bands from his town, and the output is pretty interesting, so I thought I'd share. Their tagline is "If your not ROCK N ROLL your not getting in!"

First up, THE WHITE GOSPEL, a three piece that has a touch of THE JAM, but with an organ and this groovy northern soul vibe to it. 'Casino' is my favorite track.

Next, TOUCHE BABY. Singer Danni has this sultry, rock babe sound to her. Give 'Born Numb' a listen. Most of their other stuff is pretty rough demo sounding, but some promise in here.


The other band that stood out on the mix was THE STUNTS. A four-piece claiming they are "more explosive than Hiroshima" - think THIN LIZZY with Ozzy riffs in there, just look at the picture of frontman James Brown below, pretty rock n roll indeed... 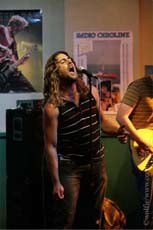 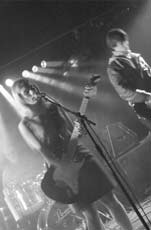 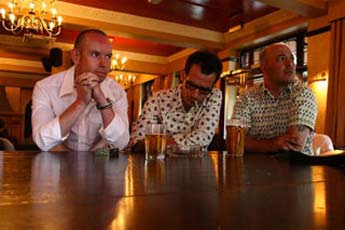